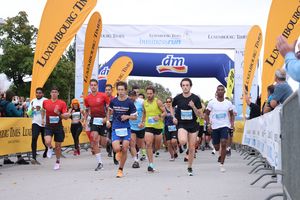 On Wednesday, September 15th, the starting signal for the 7th Luxembourg BusinessRun was given virtually, on Thursday, September 16th at 7 p.m. the live runners started at d’Coque. The weather also cooperated and provided an extra portion of good mood for all participants. Numerous teams came to the live event or met in groups to take on the sporting challenge together virtually. By Sunday, September 19th, a total of more than 1,700 participants took the 5.5-kilometer running course, either live or virtually using the viRACE app.

So team building was not only done in real life, but also digitally. Whether with or without timekeeping, the virtual participants can run alone or in small groups on their personal favorite routes from Wednesday, September 15th to Sunday, September 19th. Runners on time are virtually accompanied and motivated during the race with the viRACE app and the moderator Hartwig Thöne. Annoucements about the race, such as „your colleague is 10 secondes ahead of you? Step on the gas again!“ provide the special BusinessRun atmosphere. Alternatively, you can run without timekeeping. The BusinessRunners in this section can complete any distance and prove it with another tracking app, running watch or similar via email to info@business-run.lu. The results will the appear in the liste of participants without timekeeping. Being there is everything – the runners without timekeeping also count within the “largest team” ranking and thus support their running partners.

A lot of things, that were denied last year, were finally possible on yesterday’s event day. A mass start with 1,500 participants – maximum number of allowed live runners – at d’Coque, the well-known Luxembourg Times BusinessRun course on the Kirchberg plateau and a finish in front of d’Coque. At the finish there were drinks from Rivella, cool non-alcoholic beer from Diekirch 0,0% and fresh fruits from Grosbusch for the runners. Afterwards, it was also possible to party a bit again – of course, everything under well-known hygiene and distance rules. DJ Christian Woll was responsible for the background music and heated up the BusinessRuns with lively beats. D’Coque provided catering for the physical well-being and there were information booths of the sponsors.

In addition, the award ceremony took place live on site again! After a few kilometers on the track, you could already guess which runners were far ahead in the category “fastest teams” at the award ceremony. Kai Merten, Tim Dülfer and Patrick Trappen from the team Blitz (Trappen Echafaudage Sàrl) were the fastest men this evening and completed the 5.5 km course in a total time of 0:53:32,98 min. Shortly behind them, the women team with Elsa Eiller, Silvia Cano Aguado and Sabrina Masciocchi from the Institut National des Langues crossed the finish line after a total of 1:13:13 hrs. The fastest mixed team consisted of Thiébault Jean, Pascal Driant and Valentine Driant. They completed the running course in 0:59:24,70 hrs.

Dominic Classen, Tom Heinen and Sandrina Pereira were the fastest mixed team of a handcraft company with a total of 1:13:36,29 hrs. that evening and thus won the special “Team Handwierk – Let’z run” award of the Chambre des Métiers.

In addition to sporting achievements, creativity was once again in demand at the 7th edition of the Luxembourg Times BusinessRun. Thanks to their special costumes, the team around SGI INGENIERIE S.A. won first place in the creative award, the secret supreme discipline of the BusinessRun. This year they dressed up as Star Wars Crew – Darth Vader himself was part of it. The Compass Group Luxembourg ran as “118 218” to second place in this category. The MG-Run also attracted the attention of the jury and received 3rd place. But even with unusual team names one is awarded at the Luxembourg Times BusinessRun. The first place clearly went to the team “Govite-19” from the Chamber of Commerce. The silver medal was snatched by the team “Road Runners Meep Meep” from Fast Track Diagnostics and 3rd place went to “Couch Gromperekichelers” from the European Investment Bank.

The social aspect is also very important at the BusinessRun, so that participants not only run together, but also for a good cause. For each live participant, €2 and for each virtual participant, €5 will be donated to the Fondation Cancer. When registering online, companies could also donate any further amount. The participants of these companies received a separate charity start number to mark their commitment and thus became so-called “BusinessRun Heroes”. In this way, the considerable sum of € over 8,000 was collected this year. The Fondation Cancer is a non-profit foundation dedicated to the fight against cancer and providing information on preventive measures. It also supports initiatives, scientific research and information campaigns in the broadest sense of the fight against cancer. The presentation of the donation will take place on a separate date.