New record of participants: Running fun on the Kirchberg Plateau 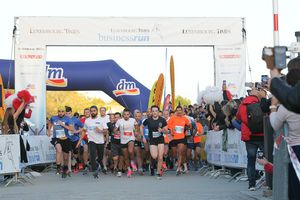 Today, Thursday September 22nd, it was time again: after two years of virtual and limited execution, the Luxembourg Times BusinessRun finally took place again as a live event with supporting program. At 7 p.m. sharp, Douwe Miedema, editor-in-chief of title sponsor LuxTimes, gave the starting signal, sending 3.959 runners from 287 companies on the 5.5 kilometers course along the Kirchberg Plateau. With this number of participants, the record from the pre-covid year 2019 was broken. That clearly expresses the importance of this sporty corporate event for regional businesses and their loyalty. “Seeing all the excitement this evening makes me very happy and proud. The BusinessRun is a great sports event and a wonderful way for Luxembourg to network. It is wonderful that we are able to do this at full scale for the first time since the pandemic,” said Miedema, after firing the starting signal. “There are hundreds of companies here, which is a sign of the vitality of Luxembourg as a business hub, and we are proud to sponsor it at the Luxembourg Times.”

Even before the race, DJ Christian Woll and the team of presenters led by Hartwig Thöne (Sport1) and Steve Kugener created a good and exuberant atmosphere. Even on the course the good mood did not let up, because the runners were motivated by a mobile DJ and the samba ban “Samba O’Leck”. The prospect of a cold Diekirch 0,0, Rivella as well as FOCUS Water and fresh fruit from partner Grosbusch certainly ensured the perfect final sprint after the 5.5 km course. In addition, each runner received the well-deserved BusinessRun medal at the finish line, which were distributed by the cheerleaders of the “Sweet Devils”. After crossing the finish line, the participants and spectators were greeted by the Coque’s AfterRun-Party with live music from the band Elliot, who created a great atmosphere on stage and set the mood for the award ceremony. On the evening of September 22nd, not only the fastest teams were loudly cheered, but also the companies with the most participants.

Team „Les gazelles de I’INL“ composed by Elsa Eiller, Sylvia Cano and Sabrina Masciocchi from Institut national des langues won the women’s classification in a total time of 01:13:07. The fastest men’s team “ARCELORMITTAL 6“ was in a time of 00:54:59 and came from ARCELORMITTAL. Anthony Parrico, Emir Grairi and Anthony Grosset were happy to receive the trophy. The title in the mixed classification was secured by the team „CAR Avenue 5“, Thiébault Jean, Alexis Jean and Valentine Driant from CAR Avenue Luxembourg in the total team time of 00:59:55. In cooperation with the Chambre des Métiers, the winning teams in the special classification “Team Handwierk – Let’z run” were awarded again this year. Here Jens Niedereichholz, Natacha Waller and Martin Vintera from Merbag S.A. made it to the first place in a total time of 01:14:41. When the moderator team came to the category of the largest teams, the space on and around the stage became a little tight, because three companies had particularly stood out from the crowd with their numbers of participants. First place in the largest team category was once again secured by Clearstream with 234 starters, followed by the runners from Schroder Investment Management (Europe) S.A. with 156 starters and PwC Luxembourg with 109 participants, respectively in second and third place. Not only the colorful running shirts of the big teams could be easily recognized in the field of participants, but also the teams that ventured onto the course with a particularly creative outfit. First place went to the team from SGI, which took to the track this year as Mario Kart. The “Aliens” from Global Facilities landed in 2nd place in this category. The colleagues from MG-RUN ran the entire course in orange “Sweaty Hugs” outfits and were voted 3rd. But it’s not only with an unusual costume that you make it onto the podium at the BusinessRun, but also with a particularly creative team name. „Dude where’s the finish line“ from company Optimum Asset Management S.A., „CEXy and we know it“ from SEB S.A. and „Auch die Schnecke macht Strecke“ from Drees&Sommer Luxembourg were awarded. “After two somewhat gray years, the event industry is finally breathing a sigh of relief again and this is shown today by all the beaming and joyful faces, the colorful running shirts and costumes,” said a delighted Anton Wolf from the organizing agency n plus sport, adding “The exuberant mood and the communal experience – all this confirms us in what we are doing. We are really very grateful and happy that the Luxembourg Times BusinessRun could take place live again. A big thank you also goes to our partners and sponsors who supported us through the difficult pandemic period and made the event as we experienced it today possible.”

The fastest virtual runners can still complete their BusinessRun on individual running routes up to and including Sunday, September 25th. As in previous years, this year’s event was again dedicated to running for charity. For each participant in the live event, the organizing team put € 2 into the donation pot, and for each virtual runner even € 5. The Chamber des Métiers rounded up these donations with a considerable sum of € 1.000 – the total donations of € 25.758 were then handed over the Fondation Cancer, official charity partner of the BusinessRun, on the evening of the event.

Thanks to all participants, service providers, helpers, sponsors and partners who made the Luxembourg Times BusinessRun possible.